I tried not to do spoilers, but just in case, this is your spoiler warning. 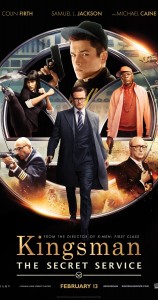 Colin Firth as a bad ass in a suit. Samuel L Jackson as a bad guy with a lisp. And a sexy assassin with two prostatic legs which turn into swords. Of course I have to watch this movie. Did I mention Colin Firth?? *swoons*
Ass kicking, suits, British accents, Samuel being awesome I loved it. I laughed and cheered and thoroughly enjoyed myself.
Until the last fifteen or so minutes of the movie. And then it crashed and burned. I was so disappointed. It felt like the director was going through his to-do list and was all “Oh crap we haven’t sexually degraded women yet, let’s throw this in.”
It had no place in the movie. First the other women in the movie were shown as people not tits and ass. Second they were training him to be a GENTELMAN, not a pathetic man-whore.
When the princess says “If you save the world I’ll give you more than a kiss.” It should have stopped there. And then the cute grin while holding the champagne glasses and bottle and going into her room, and end, because ‘gentleman’ and really you don’t HAVE to sexually degrade women to make a movie.
So IF I watch the movie again I will stop before the very end so I don’t have to be disappointed and pissed off by the ending.