My new apartment is furnished in mostly IKEA, which means I put together quite a bit of IKEA. 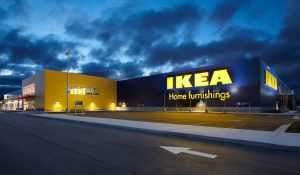 I am normally not great at putting together stuff. Yes, I needed to go slow and even re-do a few things, but all in all I found the directions easy to follow.

I enjoyed putting together IKEA. I swear, I really did.

While I was putting together another bookcase, I had a thought. How fun would it be to watch teams compete as to who could put together a house of IKEA furniture the fastest? The furniture could go to organizations like Habitat for Humanity, shelters, or to replace lost items after a natural disaster.

Sure, you could have regular people. I envision teams of three. One to manage the directions and hardware, and two to put the items together. BUT, what if it was done by celebrities?

Okay, so I was on an Avengers kick. But the teams could be anyone. The cast from Pitch Perfect, Sherlock, Game of Thrones, Riverdale, etc. Maybe it only seemed fun while I was surrounded by Swedish engineering.

What do you think? Would you watch celebrates try and put together IKEA? Who would you like to see?