SMILE AND BE A VILLAIN by Colin Falconer

Today my fellow blogger and wana minion Colin Falconer has agreed to share with us his thoughts on villains, because every good story needs a great villain. 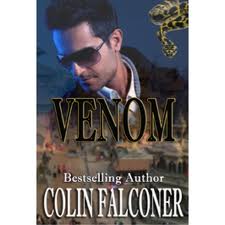 When I wrote VENOM friends who read the book asked me how I could dream up such a thoroughly evil man. Because they knew me, they wondered aloud at my devious mind.

In life I don’t consider myself devious at all; there are two reasons I managed it. One, it was based on a real character: Michel Christian is not Charles Sobrajh, but his life was the inspiration and I borrowed his MO.

I also wanted to write the story because I knew how close I came to being one of his victims when I was backpacking through Asia in my twenties. Our paths crossed several times and in several places.

But I believe it’s Michel Christian’s character that makes the book; it not serial killing that fascinates me, it’s charisma. Because true evil is irresistible – until it’s far too late.

I wrote VENOM as an edge of the seat thriller; when it was released in the UK I treasured the letters blaming me for a bad day at work. I was up to 4am finishing your damned book!

But my ambition was to do more than this. I wanted to describe the kind of man, or woman, that we should all learn to treat more warily; the charmer, the beauty, the charismatic life of the party. They are either the most loveable – or the most lethal – people in the world.

The loner who preys on society is dangerous but unsurprising. If you don’t hitchhike or jog in dark places they can be avoided. But we are all prey to the Michel Christians of this world.

One of the most laughable things you hear after a serial killer has been caught are his neighbours telling journalists that he/she seemed so nice. So normal. BUT OF COURSE THEY DID!!! Most of us cannot imagine outwardly warm and charming people committing crimes; this is why they get away with committing them. It is the first chapter in the defence lawyer’s manual.

Charm is the monster’s most basic weapon. It can be entirely manufactured, in the way that conscience and integrity cannot.

As any introvert will tell you, becoming sociable or even charming is something you can easily learn. You will never be a true extrovert. But it’s still an acquired skill and as such should be used responsibly.

Serial killers and predators of every kind – including wife beaters and paedophiles – rely on the fact that people will take them at face value. But face value is just that; something people do with their face.

In Groningen, in Holland, some ground-breaking work is under way at the moment to explore this phenomenon. Scientists are learning to measure individual levels of empathy in the human brain; because empathy is what makes us human.

Show someone a picture of a crying or injured child and most often certain circuits in the brain will light up; it is the empathic response. Most people want to help or to comfort.

Yet in certain individuals that response is completely absent.

Most often such people become aware of their difference to others at an early age and learn to mask it. And it is in the successful disguise – the joker – that you have the making of the true monster. You have Michel Christian.

(Read more on the Groningen experiments here: THE EMPATHY EXPERIMENTS)

As well as being sexy and attractive, Michel is courageous, resourceful, determined – there is so much to admire and be seduced by. Yet he feels nothing but his own pain.

The real danger in such people is that they are irresistibly drawn to those who have the most empathy, because they cannot comprehend its absence in someone else. They completely misread the sociopath. They ignore the things that don’t quite fit, the things they do that should serve as warning. It happens every day, from email scams where people lose their money to romances gone bad where people lose their lives.

How many of us reading this have been duped by the man or woman who smiles and yet remains a villain; and further, have then discovered how pointless it is to warn others, for they only see the smile and yearn for its warmth to shine on them?