Three Fairy Wishes or How We Curse Our Children

In our youth, or during the hormone-induced states of pregnancy, we say foolish things. What we don’t realize is just like the fairies from Sleeping Beauty we can impart wishes on our children. We do this without thought and certainly without meaning to.

Don’t believe me? I can give you examples.

When I was about four or five months pregnant with my son, I was reading Calvin and Hobbs. I can remember saying, “You know I don’t think Calvin’s parents really appreciate him.” 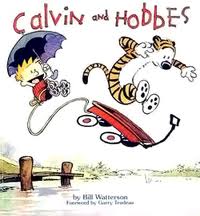 Um, HELLO, what person in her right mind says such a thing when she is about to have a baby!!! My son put on camo, climbed, jumped, and hid constantly. It was so bad that at the playground I would sit facing away from whatever he was doing.

Other mom’s would come up to me and say, “Um, did you know your son is climbing onto on the play equipment?”

“Yes, thank you, don’t worry I’m listening for a splat sound.” Then I would smile and force myself to not turn around and see what terrifying thing he was doing.

This hasn’t changed, he does martial arts, bikes 14 miles a day, practices parkour, and is planning to go to Kenya with a school group as soon as he’s able.

I have come to accept that I will be terrified of whatever he is doing for the rest of my life.
Okay, one example isn’t conclusive evidence, but I have more.

When Logan was about six months old I was standing him in front of the mirror, and he was smiling and laughing and totally enjoying how awesome he was. And I said, “I hope you’re always able to look at yourself with such joy and self esteem.”

This year I got this from a teacher: “The only thing Logan is lacking is a touch of humility.”

When asked what for something good he brought to a class Logan wrote. “I am a super awesome helper.”

When planning his outfit for prom I said, “I think you’d look rather dashing in a vest.”
Logan rolled his eyes and said, “I’d look dashing in anything.”

Before you get the idea that my son is an egotistical jerk- he really isn’t, he knows his limits, and asks for help when he doesn’t know what to do. But he also has no illusions as to who he is and what he can do.

Now before you think, “I don’t have to worry I’m smart enough to never have children.”

You, too, have the power to bless or curse a baby.

A friend attended the birth of my daughter so that Logan would have an adult there to help him (he was only five) in case he needed anything or needed to ask a question. I gave birth at home, and Logan saw Tala born. Sex does have clear consequences to him now 🙂 Anyway, Adolf was holding Tala, poor thing was an hour old when I heard him say. “Wow, she’s so fierce like a tiger.”

And she is. Tala is extremely headstrong, and willing to argue with teachers and her principal if she feels they aren’t being fair. I’m a bit worried about her getting expelled one of these days. My daughter won’t be taken advantage of, that’s for sure, and she is clear and fierce about what she wants in life.

So as you carry your baby or hold and cuddle someone else’s please have pity and bless these children with gentle things. And don’t ever say Calvin’s parents didn’t appreciate him, trust me just don’t go there.

Have you ever blessed a baby? Did it turn out well?