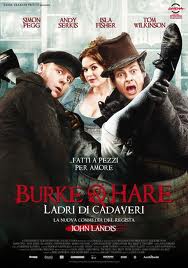 So here we have a British comedy with Simon Pegg, Andy Serkis, Jessica Hynes, Tim Curry, and this cast list alone should make you run out and get this movie. It’s a dark comedy about the Edinburgh medical school’s need for bodies in the early 1900’s. Two men down on their luck happen upon a newly dead body and sell it for a tidy sum. They need more money, and grave robbing is out. The local police guard the cemeteries closely. So they create their own dead bodies by killing people.

Even though they do this, I never once disliked them. I should: they were cold blooded killers, but the movie is done in such a way that you can’t help but like them, or at least I couldn’t.

You might not want to eat during this movie: there are autopsies being done. I’d keep it to older teens and adults due to the graphic nature.