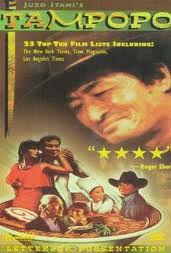 I’m not sure how to describe Tempopo- It’s a Japanese film. With an odd Western (as in wild west) feel to it. But it’s not a sushi western. The film really is about food. Yes, relationships develop and characters grow- a bit- some of them- but the focus of the movie is on food.

We follow a woman and her journey to make the best ramen noodles in order to support her and her son. She gets help from a truck driver, and he takes her to seek out many other people in their quest for the ultimate bowl of ramen. I highly recommend having noodles after the film, you’ll want them.

There are also little vignettes. A group will walk by our main characters and suddenly we are following them. Some of the vignettes are funny, some sad, one was sexy and then disturbing.

There doesn’t seem to be a point except to show how people feel about food. The movie ends with a baby nursing.
I liked Tempopo it was fun and I’m glad I watched it. I might even watch it again some day, but it is definitely an odd movie. It is not safe for kids to watch as there is nudity, and sex play with food- so personally I wouldn’t watch it with teenagers because I don’t want to explain kinks yet- or possibly ever.

If you love food, and odd Japanese films, get yourself some ramen and enjoy Tempopo.